Wanted to get the ROG Phone 6 but preferred a different chipset? Well, Asus has got your back as they announce the ROG Phone 6D Ultimate, powered by the newest Mediatek Dimensity 9000+.

ASUS already has quite a number of ROG 6 phones released this year, so what makes the ROG 6D Ultimate any different aside from the Dimensity 9000+ chipset?

Well, everything else on the hardware side seems pretty similar to the ROG 6 but the ROG 6D comes in this exclusive Space Gray color while the ROG 6D Ultimate is also bundled with an AeroActive Cooler 6. That means all accessories available for the ROG 6 will also be compatible with the ROG 6D series.

If there’s one thing that separates the ROG 6D Ultimate, it would be the AeroActive Portal which is a flap that opens to offer better cooling to the device. The flap assembly is raised when you attach the AeroActive Cooler 6, making a more efficient cooling via the airway. Theoretically, this makes the cooling system more effective.

Also, just like the ROG 6 Pro, there is a 2-inch OLED ROG Vision as a secondary display at the back.

If you are curious about how the Dimensity 9000+ chipset fares against the Snapdragon 8+ Gen 1, we looked at several benchmark tools to compare their performance.

(Note: Some benchmarks terminated before completing the tests. Perhaps, this is due to some pending software updates we need to install. It was scorching hot (67.7 °C) during our 3DMark test.) 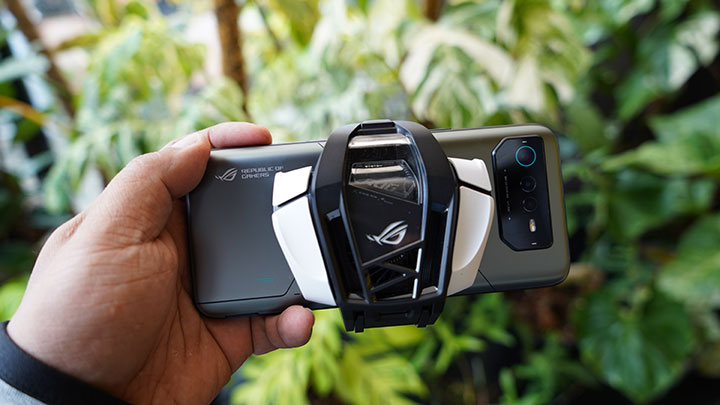 The results for the ORG 6D Ultimate are pretty much comparable with the rest of the ROG 6 series and even slightly higher compared to the one we got from the ROG 6 Pro.

Is it the better ROG phone? We can’t say for certain but it’s way up there. Perhaps, it will depend on the user’s preference between the Snapdragon and the Dimensity chipsets. Either way, we’re sure you’d get the best performance whichever variant you’d pick.

The look and feel are the same, performance is comparable and over-all experience with the phone is pretty much similar with the rest of the ROG 6 series that it’s hard to distinguish one from the other once you slap on the case that came in the box. It’s just that Asus wanted to offer as many permutations of their flagship gaming phone to their fans.

As for the suggested retail price in the Philippines, we still don’t have a definitive figure but if we had to hazard a guess, it might be in the Php50k to Php60k range.

If you are interested more about the ROG 6D Ultimate, you can check out our earlier review of the ASUS ROG 6 Pro here.