Jonaxx fans celebrate #jslfieday in honor of their favorite author

You may know this author best from the popular Alegria Boys, Montefalco, and Del Fierro series of books featuring swoon worthy gentlemen in varying romantic situations.

However for hardcore JSLs (short for Jonaxx Stories Lovers), she is much more than that. Jonaxx is able to establish a sincere connection with her readers through the relatable cast of characters in her stories. 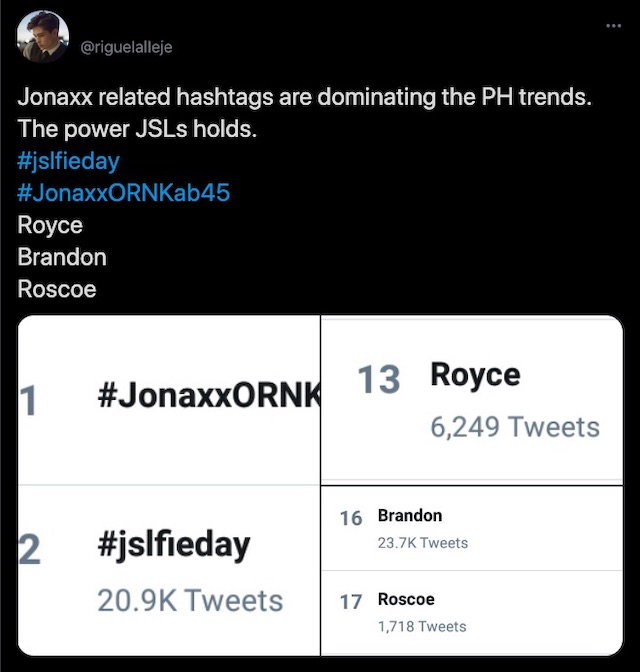 Her books have inspired fierce loyalty and great dedication among fans, who are one of the most active in the local romance novel scene. Taking a page out of the K-POP fandom, JSLs wanted to strengthen the bond with each other by holding their own selca day. (A practice which the P-POP fandom has also adapted for bands such as SB19.) And so today marks the very first #jslfieday!

Now it was time to reveal the face behind the fan. Many types of posts were all over the Twitterverse. You had JSLs who proudly flexed their photo and instantly received thousands of likes. There were also JSLs who casually cosplayed as queen Jonaxx herself like in this post. And the best part is that there are fellow fans who will readily reply with a heartfelt compliment!

Are you interested in joining the fun but feeling a bit hesitant? Just take a deep breath and think about your Jonaxx boys such as Josiah Travis Rivera Montefalco or Roscoe Del Fierro. Wouldn’t they be the type of men to gently remind you of your inner and outer beauty? (Yihee!)

So believe in yourself more and start posting while the tag is still trending!